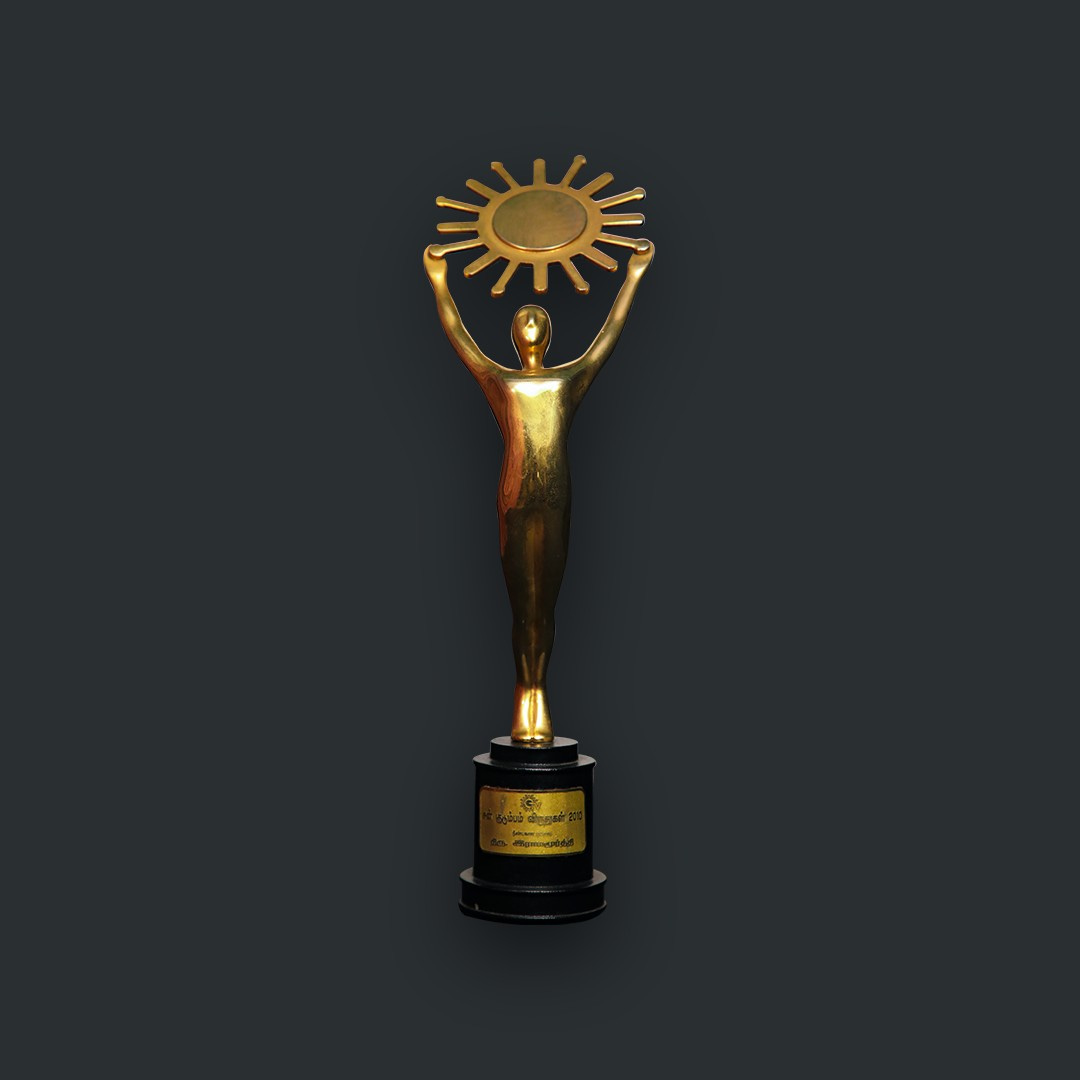 Mr.Ramamurthy was presented this prestigious award for his A Long-Standing Relationship with Sun Network in 2010.

Sun TV is an Indian general entertainment channel, It is the first regional channel to hold all India number one position in TRP Rating. It is the most viewed Tamil television channel in the world with broadcasts in several countries such as United States, Singapore, Malaysia, Arab Emirates, Sri Lanka, Australia, Canada, South Africa, Qatar, Hong Kong, Europe ( UK, France, Italy, Germany, Denmark, Austria, Switzerland, Netherlands, Ireland) and many more.

The Sun Kudumbam Awards is an awards ceremony held to honor the cast and crew of the television serial fraternity presented by Sun Network. 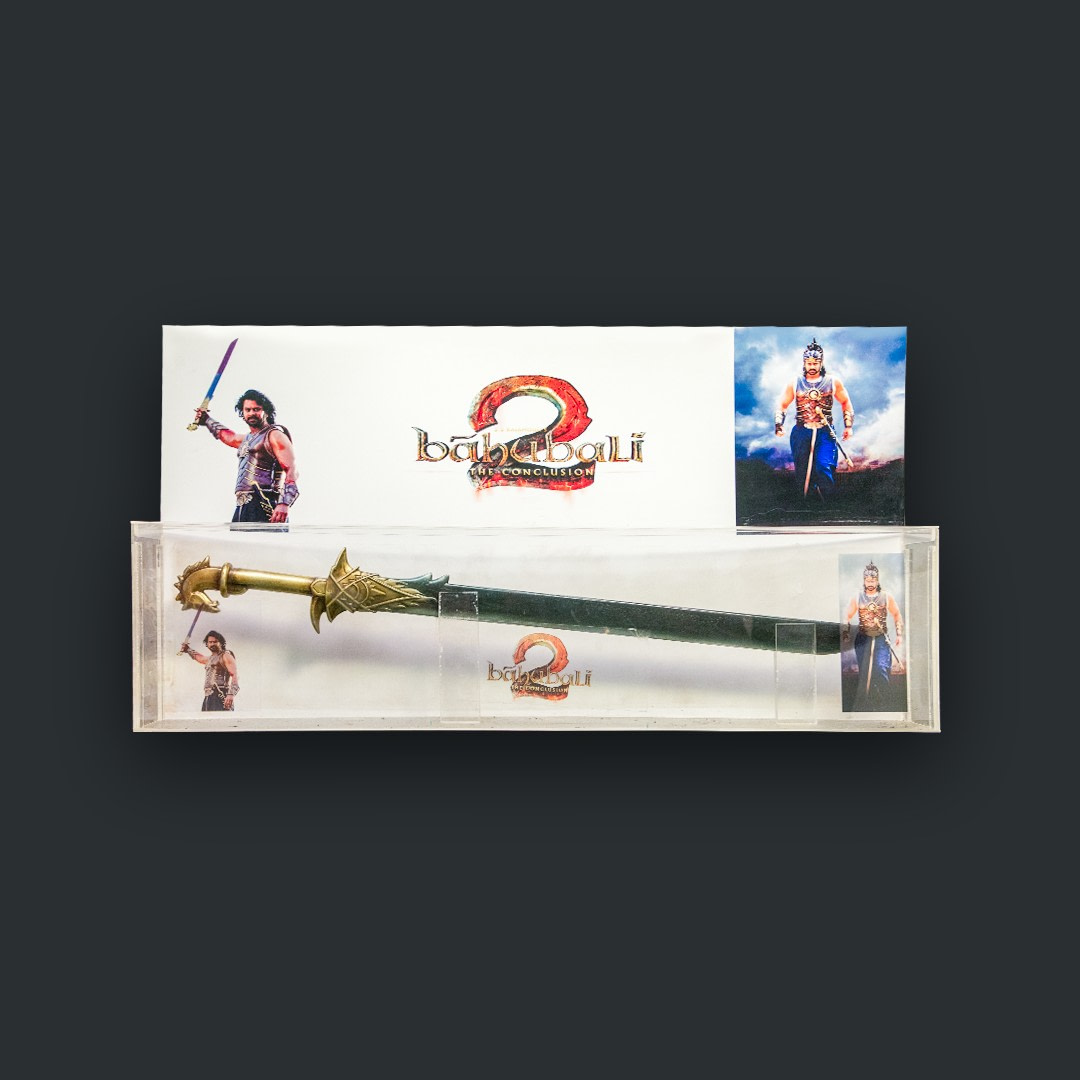 Baahubali is an Indian media franchise created by K. V. Vijayendra Prasad and S. S. Rajamouli. It consists of a two-part film series (filmed in Telugu and Tamil) directed by Rajamouli. The films in the franchise were jointly produced on a ₹4.3 billion (US$60 million) budget. The first part subtitled The Beginning was released on 10 July 2015. The second part subtitled The Conclusion, was released on 28 April 2017. 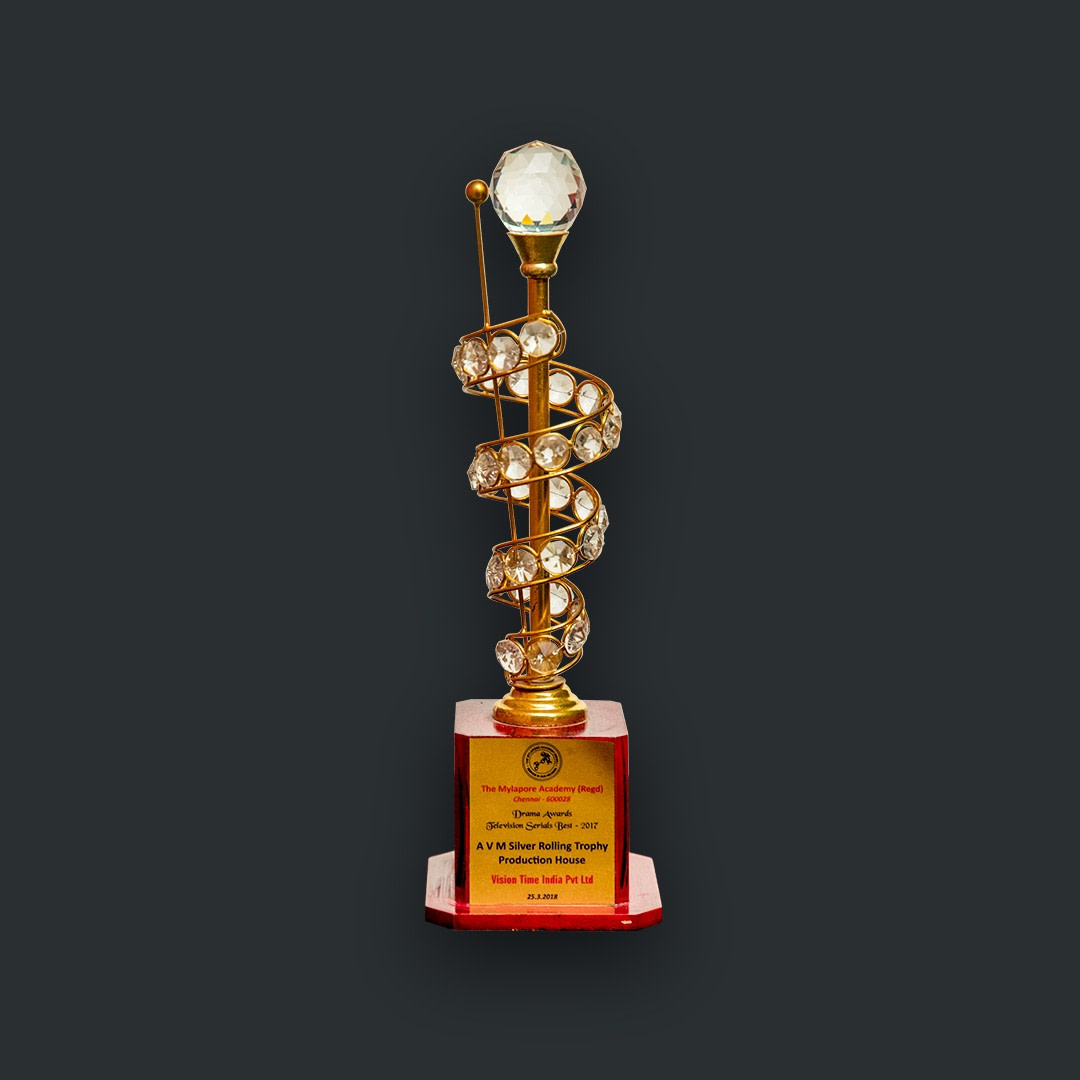 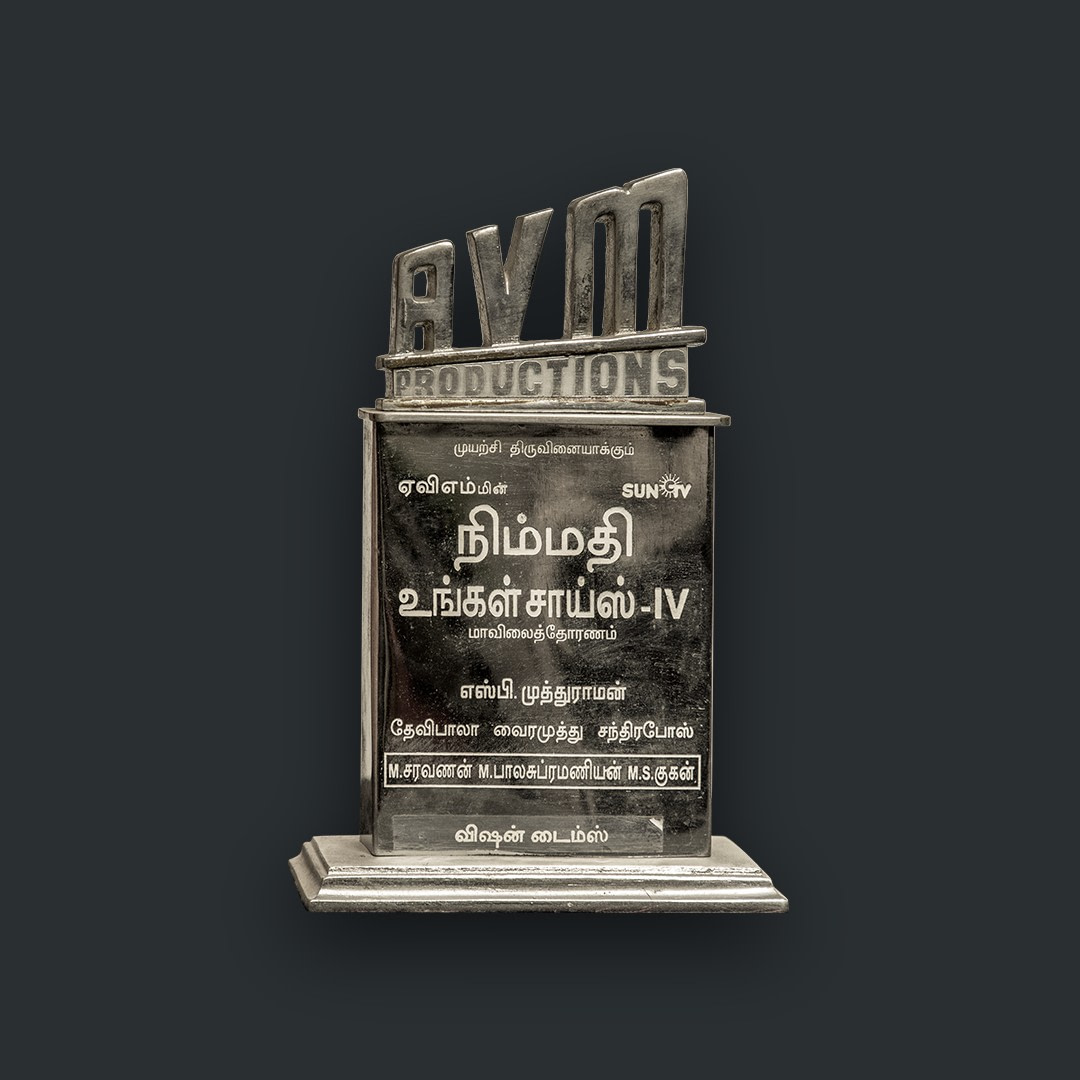 AVM Productions have presented an award to Vision Time for the success of Nimmathi Ungal Choice which is one of the most successful televsion serials in it’s time.

AVM Productions is the final oldest survived studio in India, It has produced over 300 films in Tamil, Telugu, Kannada, Malayalam and Hindi cinema. AVM has introduced numerous talented actors in Southern industries, some of the prominent actors are Sivaji Ganesan, Rajkumar, S. S. Rajendran, Vyjayanthimala, Rajinikanth, Kamal Haasan and many more. The AVM Studios besides the shooting floors, has recording, dubbing and a preview theatre. The complex also houses facilities for production and post-production processing making it one of the most important names in South India. 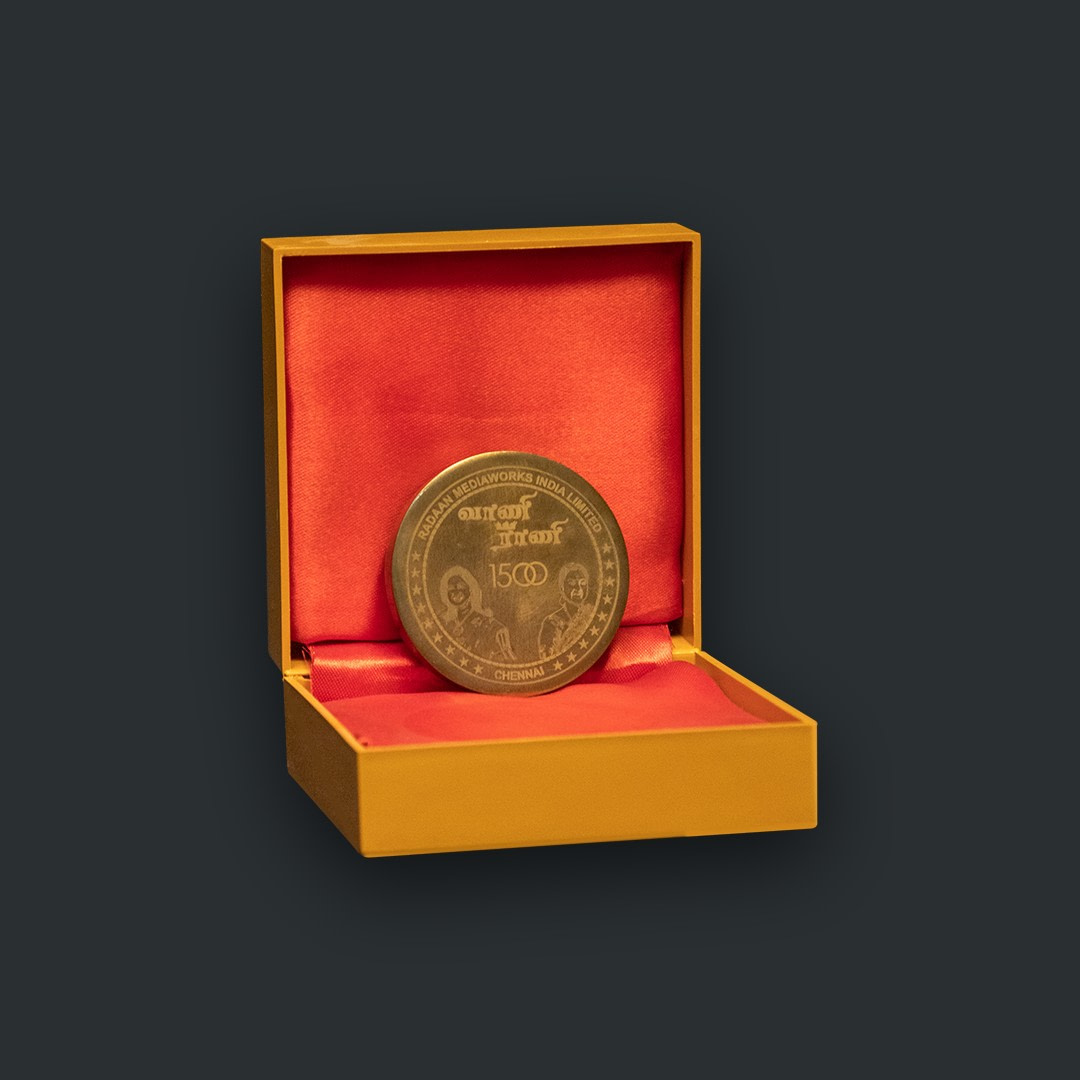 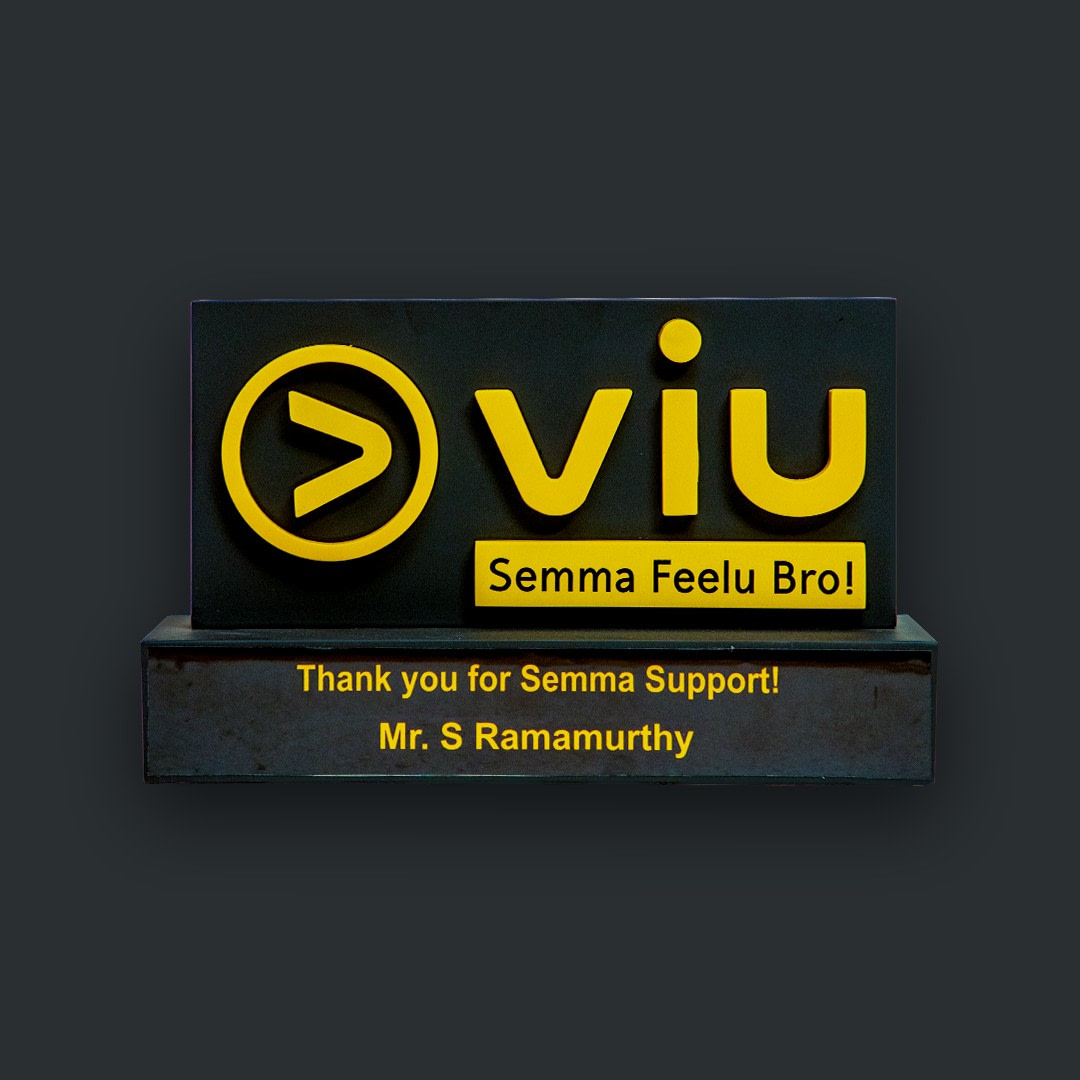 Viu, a Hong Kong-based over-the-top (OTT) video streaming provider has awarded Mr.Ramamurthy for his extended support with the launching of their platform in India. 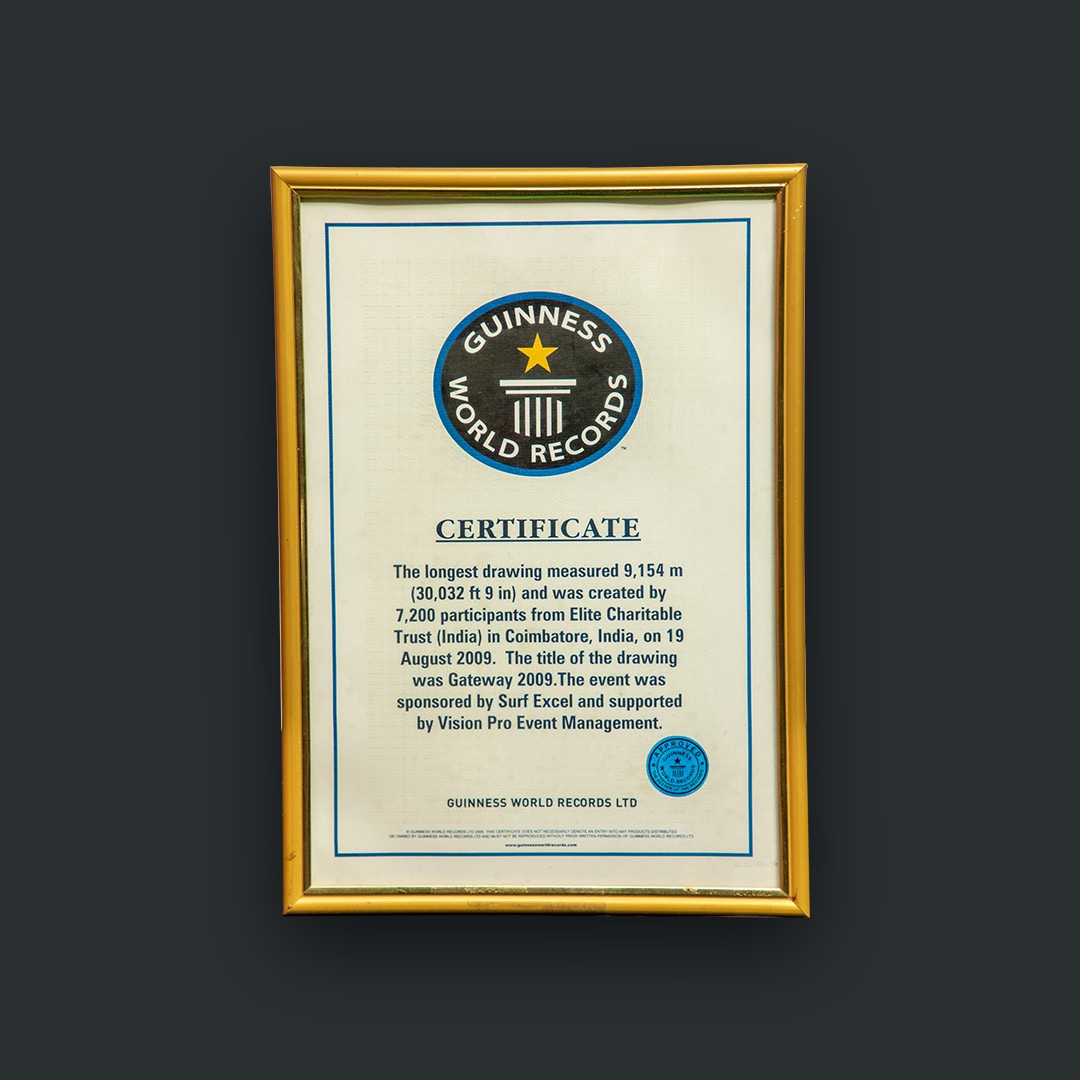 The event was sponsored by Surf Excel, which is owned by Hindustan Unilever Limited (HUL), and the event was supported by Vision Pro Event Management, It was a huge challenge to create the longest drawing ever which entered the Guinness World Records in 2009 for being the total of  9,154 Metres. 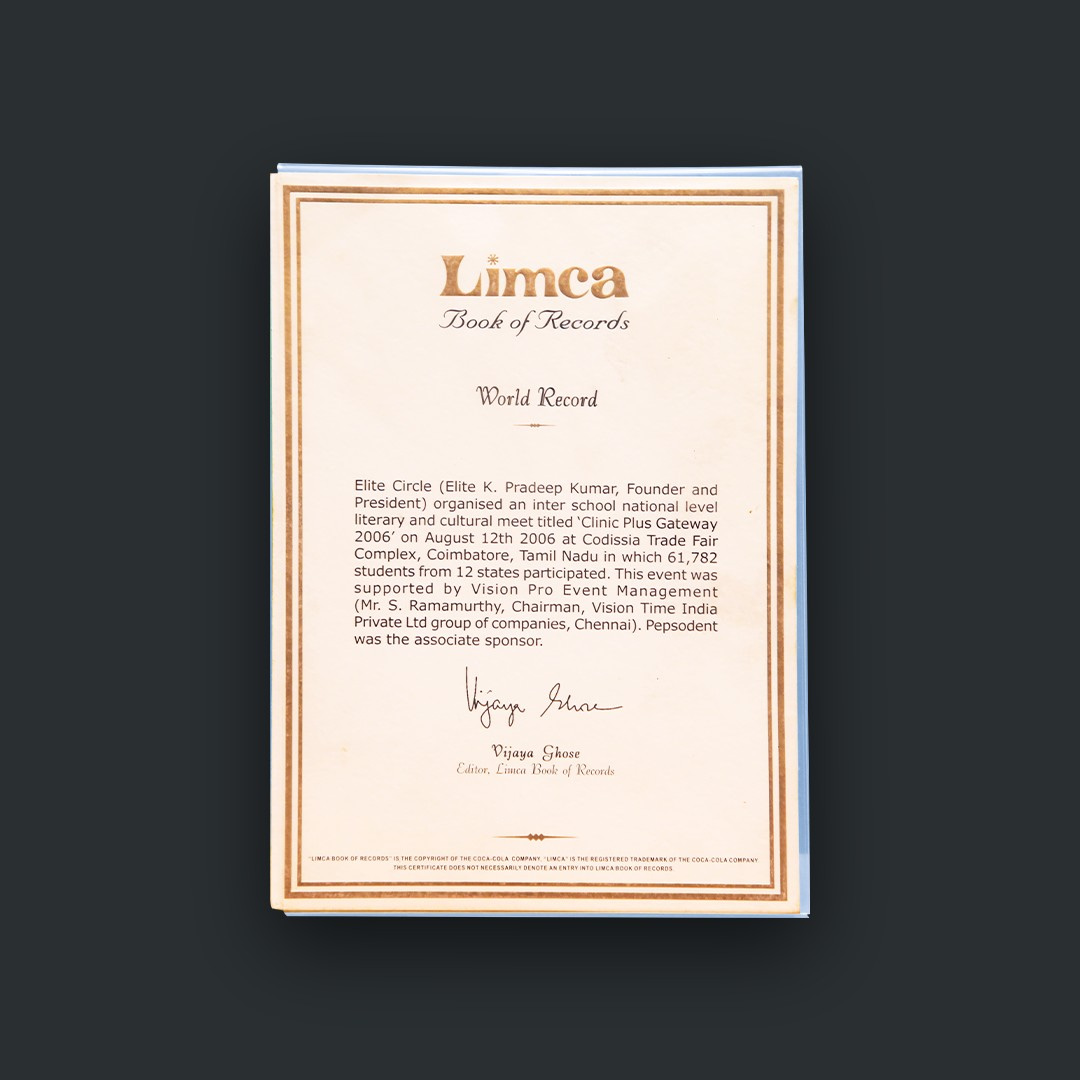 Elite Circle & Vision Pro Event Management, Chennai organized an interschool National Level cultural and literary titled “CLINICPLUS GATEWAY 2006” in Coimbatore, Tamilnadu where 61,782 students participated from all over India which included 12 states, made it’s entry to the Limca Book of Records in 2006. 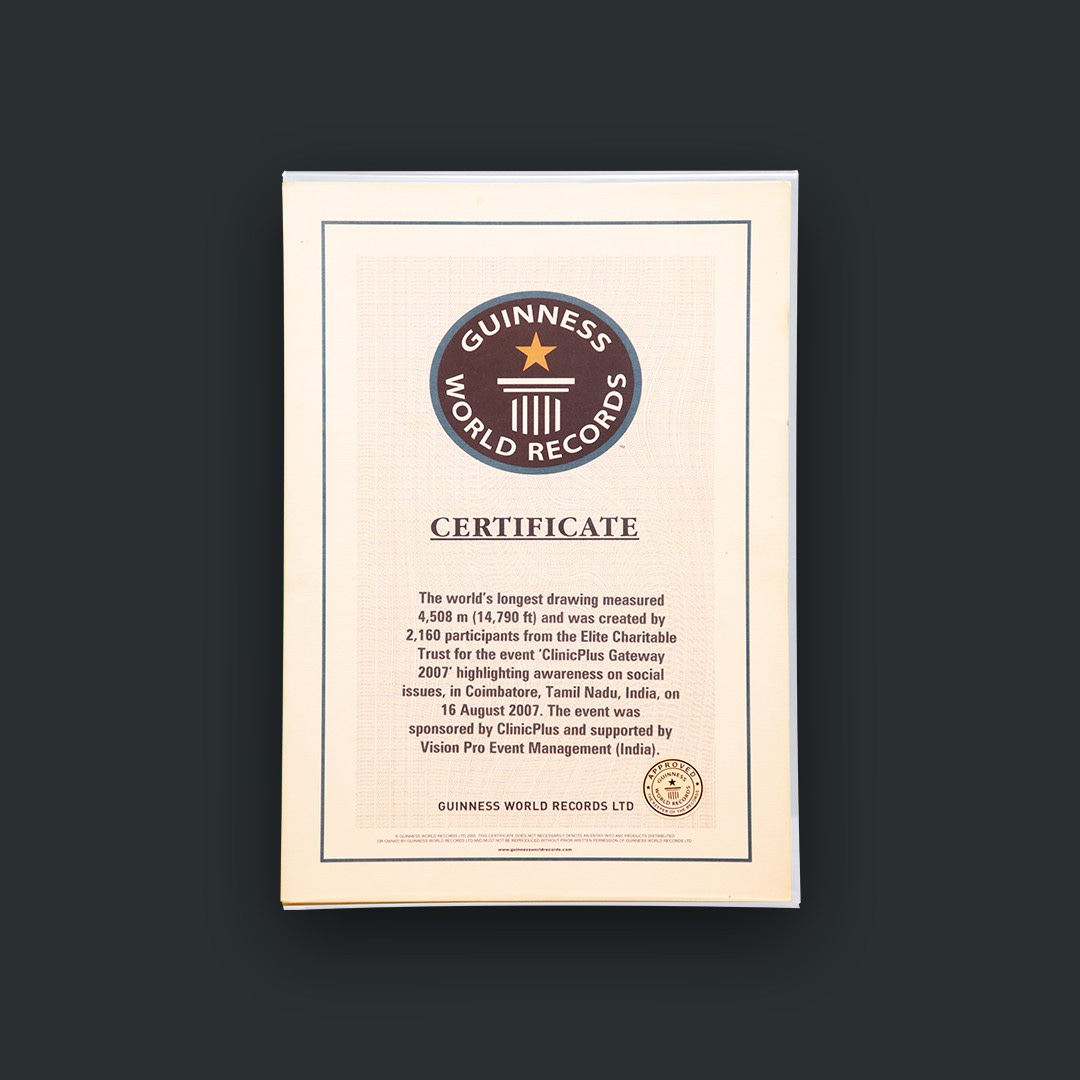 It was an ambitious record to create the world’s longest drawing measured 4,508 metres (14,790 ft) and was created by 2,160 participants from the Elite Charitable Trust for the event “Clinic Plus Gateway 2007” highlighting awareness of social issues, in Coimbatore, Tamil Nadu, India on 16th August 2007. The event was sponsored by ClinicPlus & supported by Vision Pro Event Management (India). 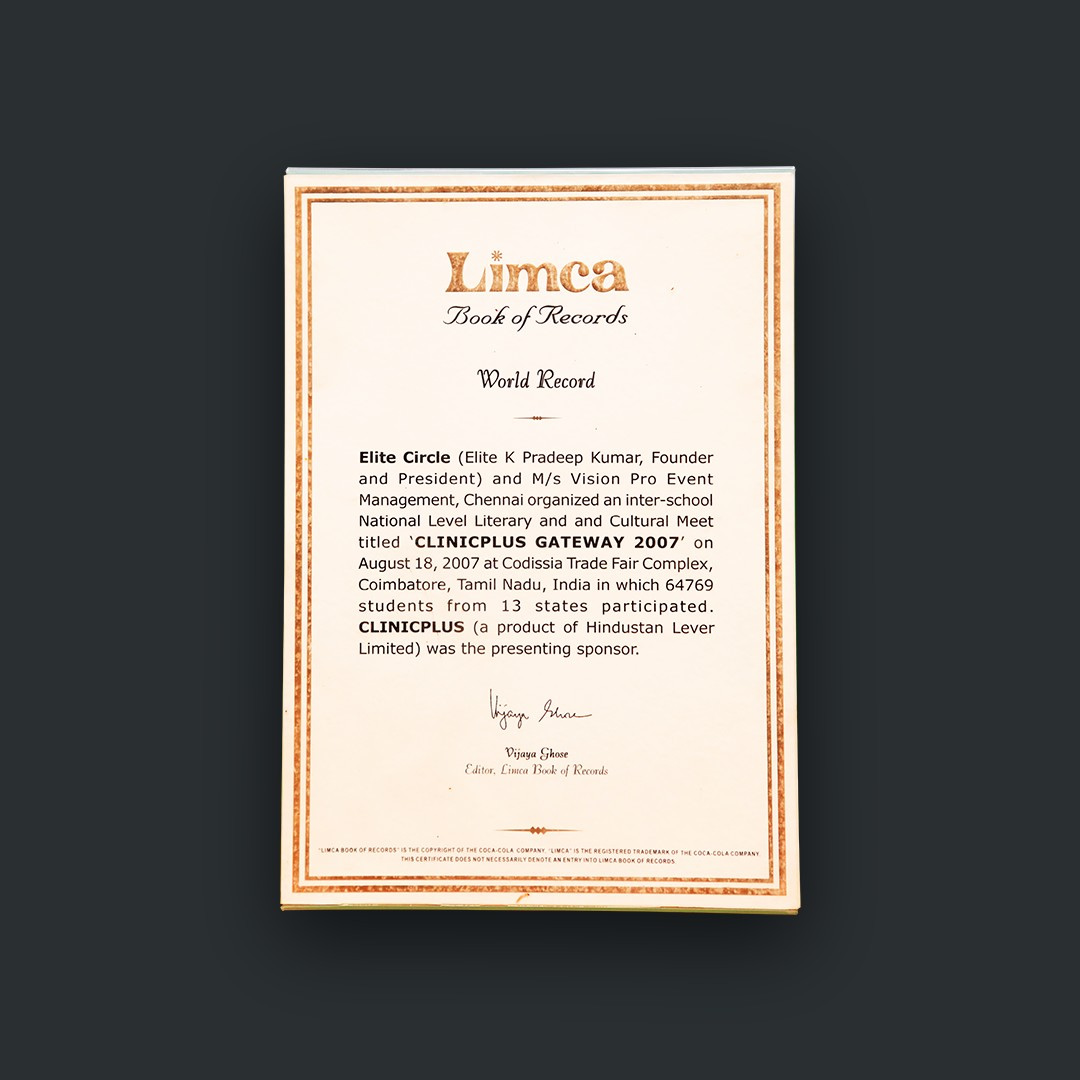 Elite Circle & Vision Pro Event Management, Chennai organized a interschool National Level cultural and literary titled “CLINICPLUS GATEWAY 2007” where we broke our own record of the previous year (61,782) with 64,769 students participated from 13 different states in an all India level event, by making a new record and entered again consecutively for the second year in to the Limca Book of Records 2007. 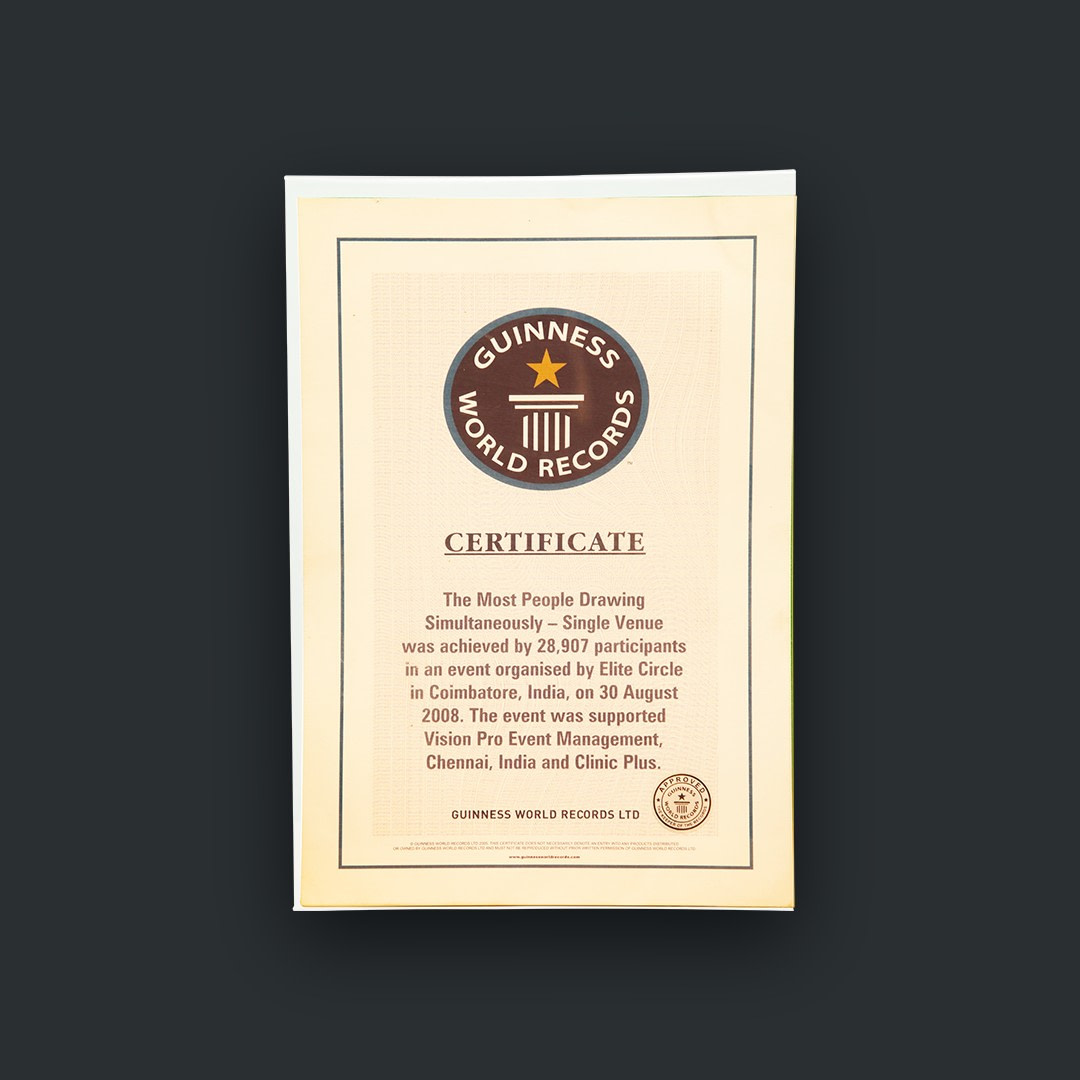 Guinness World Records for the most people drawing simultaneously – 2008

In our efforts to encourage & promote Art & Artists, we decided to create and world record event for the Most people drawing simultaneously achieved by 28,907 participants in an event organized by Elite Circle in Coimbatore, India on 30th August 2008. The event was supported by Vision Pro Event Management, Chennai, India, and Clinic Plus. 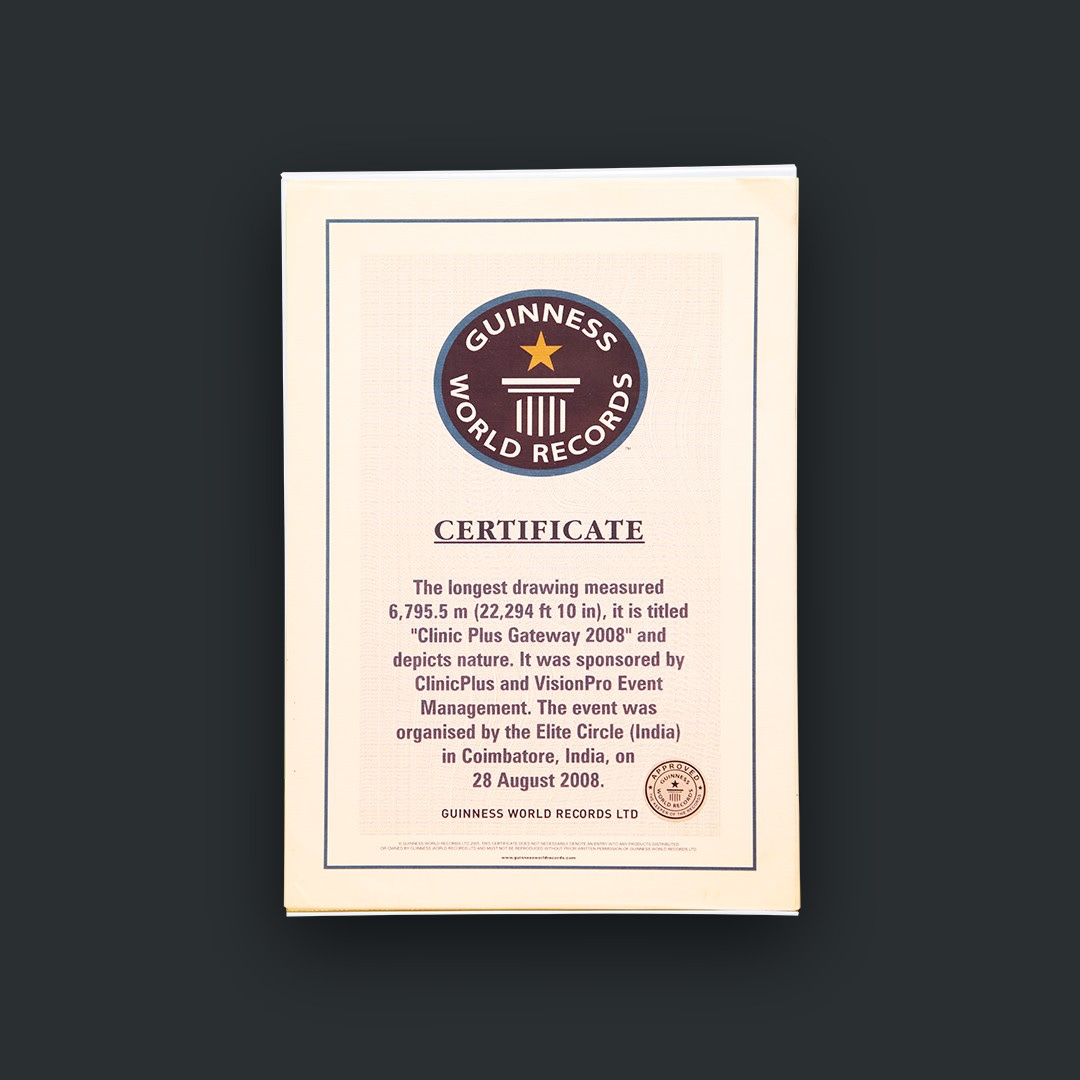 To promote the preservation and protection of nature, we created an awareness campaign with the longest drawing measured 6,795 Metres (22,294 ft 10 inches) surpassing our own record from the previous year, it is titled “Clinic Plus Gateway 2008” and depicts nature. It was sponsored by ClinicPlus and VisionPro Event Management. The event was organized by the Elite Circle (India) in Coimbatore, India on 28th August 2008.